Mountain Brook is a prosperous community, but that prosperity doesn’t just happen. It’s the fruit of a lot of hard work by the people who make their lives here.

“A lot of dedicated people live and work there,” he said. “Nearly all of them earned the money themselves. What I’ve seen over the years is that not everybody is wealthy who lives in Mountain Brook by any stretch, but their parents chose to live here to be able to send their kids to the good schools.”

Dick Shea is one of those hard-working people.

Co-founder of Morris-Shea Bridge Company, he has built bridges and laid foundations all over America and has used his wealth and construction knowledge to benefit Mountain Brook.

“I think he’s one of the most unsung heroes of our city,” Mayor Stewart Welch III said. “He has done so many things behind the scenes.”“

He has contributed a lot more than the majority of Mountain Brook residents know,” City Council President Virginia Smith said.

People describe Dick Shea as a modest, unpretentious guy who loves the city and has worked to make it better without craving the spotlight, even as several new improvements at the athletic complex he loves come to fruition thanks in part to his money, guidance and sweat.

“He’s incredibly generous with his time and talent and financial resources,” City Councilor Billy Pritchard said. “He’s a mover and shaker. When he gets behind something, it gets done.”

Born in Memphis in 1942, Shea moved to Birmingham in 1955 with his mother, brother and two sisters after his parents’ divorce. His mother, Beulah Pittman Teague, was a Magic City native.

He graduated from Ramsay High School in 1960, earned a degree in civil engineering from the University of Alabama and was hired by Harbert Construction in 1965.

Harbert was “really good to me,” Dick Shea said. “They gave me a lot of opportunities.”

He married Mountain Brook native Anna Davies in 1967 and co-founded Morris-Shea Bridge Co. with Walter Morris, who worked at Harbert and was Shea’s boss on the Red Mountain Expressway project, in 1969.

For nearly 20 years, the firm primarily built bridges for new interstate highways in the Southeast.

Since Dick Shea became sole owner of the company in 1987, he has focused on foundation work.

One way that Dick Shea has shown his love for Mountain Brook is through making numerous improvements to the athletic complex, which was created beginning in about 1989.

He was the “primary force,” Pritchard said. “There were a lot of others involved … but it wouldn’t be there without him.”

It makes sense that Dick Shea would be interested in youth athletics because his sons all played sports in Mountain Brook.

“He was usually my little league coach in football, basketball and baseball and never missed a game when I was in junior high or high school,” Bill Shea said.

“Everybody was in a panic,” said Dick Shea, who noted that the city had little land available to build new fields.

He then went to school board official Fred Renneker with the idea of building new fields on land the board owned next to MBHS.

“Me and my brothers were all done with little league,” Bill Shea said. “But he wanted there to be a proper complex for Mountain Brook youth to practice and play softball and baseball.”

Through his company, Dick Shea has continued to make improvements at the facility. “He’s donated a lot of work or bid really low,” Parks and Recreation Superintendent Shanda Williams said.

For example, he donated new LED lights, which last 20 years, use almost no energy and are very bright, for Field No. 5 at the complex. The old lights at the fields “were terrible,” Dick Shea said.

The city then converted the rest of the fields to LED, Williams said.

Dick Shea improved the infields, putting in a special kind of soil that solved some drainage issues, Williams said. He donated the new dirt and grading services.

Working with landscape architect Chuck Kelly, Dick Shea has also developed a plan to solve drainage issues behind Fields No. 3 and 4. The plan involves a new access road, retaining walls and some drainage work.

Dick Shea offered to do the grading and drainage for free if the city would pay for the retaining walls, Williams said.

The retaining walls had to be bid out, and Dick Shea made the low bid at $59,000, Williams said. He has since donated some additional materials for the retaining walls that will save the city about $30,000, she said.

Shea is also involved in another large project at the complex — converting the fields to artificial turf — for which he submitted the lowest of five bids at about $1.8 million.

That means that Dick Shea, at press time, is working on the turf, grading and retaining walls all at the same time.

“We will almost have a brand-new complex when everything is complete,” Williams said.

Williams said Dick Shea also likes to get his hands dirty. “He doesn’t just write the check,” she said. “He will get out there and do the work.”

He also played a key role in building the Jemison Park Pedestrian Bridge, which opened in January 2019 after three years of planning.

The bridge across Shades Creek dramatically improved access to Jemison Park Nature Trail for all area residents and was funded in part by a donation from the Mouron Family Foundation.

It was also made possible by Dick Shea’s skills as a bridge builder, since any new structure would need to withstand heavy flooding along the creek.

Before the bridge was landscaped or opened to the public, he gave Welch a tour.

“I asked Dick why it was built so high,” Welch said. He said, ‘Stewart, the first time we get one of those really big rainstorms, you will understand why.’”

After the next big storm, Welch did understand. “The water was two feet from the top of the bridge, and it held up,” he said.

“I recall that the first drawings were a wooden bridge,” the mayor said. “Dick said that the first year we have one of those 100-year floods that it will be down the creek.”

The bridge is special, at least in part, because it took so long to complete the project, Smith said. “Fortunately Dick persevered and made it happen,” she said.

Dick Shea said he wanted to do the job right. “If you were going to do it, why not do something that people will really like instead of some old wooden bridge that will be a maintenance nightmare for the city,” he said.

Dick Shea bid that project low, the mayor said. “When he got into the construction, he decided to do something to make the bridge more substantial,” Welch said.

“He was the happiest person in the world to stroke that check and never wanted any recognition,” Welch said.

The engineer explained why he resists seeking credit. “It’s my personality, but the other thing is I did what I did for the children or the bridge down in the park,” he said.

He said there are a lot of “very good and giving people” in Mountain Brook who contribute to a lot of projects but “don’t flaunt it.”

“I think that is very natural for Dick to push it off and say ‘I’m not the only one,’ and he’s not, but he does deserve the accolades,” Smith said.

It would be unlike his dad to seek the spotlight, Richard Shea said. “It’s just not what he does,” he said. “You don’t do nice stuff for people just to get credit for it.”

His father is also not pretentious, Richard Shea said. “He’s just a blue-collar guy who works his tail off.”

Dick Shea said that his sons “handle nearly everything now” and that they have started another company called Shea Brothers. “Eventually the Morris-Shea name will go away,” he said.

But he shows no signs of slowing down.

“His version of a vacation is to go work on the farm,” Richard Shea said, referring to the family’s 1,000-acre spread with a 100-acre lake in Blount County. “I wish I had half the energy he does.”

Dick Shea also shows no sign of slowing down in his commitment to the Athletic Complex, Williams said.

“He is going to help us prepare for a new playground, replace some batting cages that were removed and upgrade the sidewalks,” Williams said. “I believe we will be working with Mr. Shea for a good while longer.” 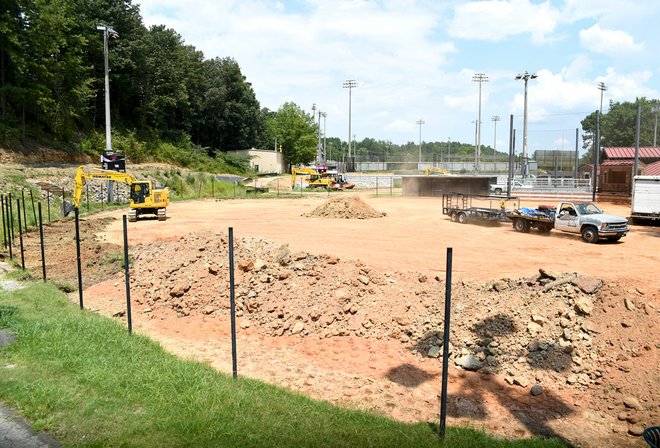 Copyright 2022 - All Rights Reserved
Back To Top